In the download archive you will find older versions of SobiPro and its applications to download for reference and update.

If you pay with PayPal but your subscription is not activated, please contact us via our contact form or directly to info@sigsiu.net.
Sorry for the inconveniences.

In this area you will find SobiPro 1.2.4 and its applications to download for reference and update.
SobiPro 1.2.x is the third series of SobiPro component. Its first version was published in October 2015. It ends with version 1.2.4.

With the 1.2.x series we continue the implementation of new features to enhance the functionality of SobiPro. So it came with a complete new default template which features several colour themes, a new ease-of-use template configuration, an integrated LESS compiler and was fully responsive out-of-the-box. Many more features were added to the integrated core fields.

To update your SobiPro component from a version below 1.2.4, please install first the final version of series 1 and/or 2 depending on the version you update from. As we dropped support for Joomla 2.5 with SobiPro 1.2, it is now the time to update your Joomla to version 3. After that you can update SobiPro to 1.2.4. Then proceed with SobiPro 1.3.7.

Do not user older versions on productions sites.
For your own safety, use always the most recent version we released.

Please refer also to the documentation!

Check out the differences between the Sobi versions

Modules for SobiPro 1.2 only. Only applications are listed, which are incompatible with the current SobiPro version and needs SobiPro 1.2.

Fields for SobiPro 1.2 only. Only applications are listed, which are incompatible with the current SobiPro version and needs SobiPro 1.2.

Please note: NO SUPPORT is given for older versions of SobiPro and the applications offered here! 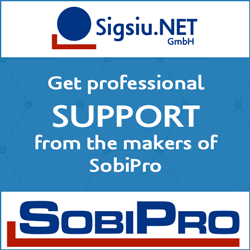